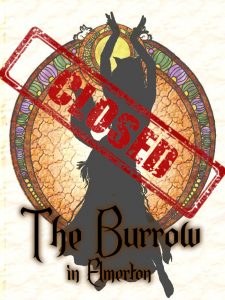 Owners of the Establishment known as ‘The Burrow” announced that the both the Riverton and the newest Elmerton establishments have closed following the discovery that several prestigious patrons, and their attendees as well as, a number of employees associated with running the establishment suffered as a result of ‘Bad Nip’.   The establishment owners explained that while they endeavor to keep their workers living environment as comfortable as possible, the workers often resign to the use of ‘Nip,’ which is strongly frowned upon.  In this instance a bad batch circulated at the entertainment site resulting in several workers falling into ‘a pack mentality’ fit of rage, catching several patrons unaware.

Establishment owners have spared no expense to collect the workers and seek out treatment for their addictions.  The owners state they will continue to search for the remaining rogue workers which they feel may have retreated to Marshall’s Landing.  The service workers who were not involved with the massacre and with amounts still outstanding on their contracts will be given an opportunity to transition to an alternate location where available or educated to take on a new trade.