On this Episode of the Magestream: We’ll Recap what happened at the April 7th-9th event, Rybin will talk about Daquamoore husbandry, and we’ll talk about spiders and Clarify some things about weapon-based and missile based poisons!

Thank you to several “anonymous” listeners for their questions for Rybin. Want to be a part of the show? You can send questions, feedback, and performances to [email protected]

Our next episode will likely be after the next event, but we will try and sneak the Death Episode in there as soon as possible! 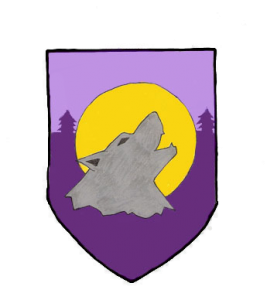 Reports have been coming in about the violence that has ravaged Terl Ayre for years.

Francine Libre, the self-styled leader of a group calling themselves the Terl Ayre slave resistance was killed in combat in the small town of Quiltshire, which was a sort of home base they where using.

Francine and her rag tag band of fighters and escaped criminals where soundly defeated by a mercenary army paid for by local nobility in the hopes that the violence against them and the local common folk would finally come to an end. One of these Nobles a man by name of Linmar O’ Rourke was quoted as saying this:

“Finally the good people of Terl Ayre have nothing to fear. Francine Libre and her band of Rogues will never again be able to hurt anyone. The long nightmare is now over and things can finally return back to normal for our country. We owe the brave men and women who fought these vicious thugs a huge debt of gratitude that coin cannot even provide. My fellow nobles and I spared no expense to ensure the defeat of this so called resistance and now all across our great land can sleep soundly.”

In the weeks following the defeat at Quiltshire it seems that the violence is finally quelled. Exports from the countryside have exploded as of late and the economy is in a giant upswing not seen since the start of the violence. Residents have noticed a sweet if not strange quiet and all seems well.

It was an unseasonably warm day, a welcome change from the bleak winter, so I decided on a walk that took me to the small town of Elmerton. As I was coming upon a crossroads on the outskirts of the town, there was a large explosion and a flash of fire shot out of the ground in front of me! Startled, I hid behind a tree peeking around cautiously so I could see what was going on. What I saw next completely rattled my mind.

A strange man with a large, strange device on his back climbed out of a new, still smoking hole in the ground. He was pulling a litter behind him on which was tied a shorter, stout man’s body. He dragged the litter off to the side of the crossroads and, laying it down gently, he went back into the hole he had made. He resurfaced a few moments later with a large stone pillar on his shoulder and planted it vertically at the crossroad. He reached down and untied the other man (from the rigidity of the body, I could only assume he was dead and likely had been for days) and lifted the corpse, propping it against the pillar.

The strange man then took the thing off his back and placed it at the dead man’s feet. From my vantage point it looked like he was messing with some kind of black vines that were sticking out of a pair of red cylinders. After a few minutes, the man stood up and looked at the dead man, a deep sadness crossing his features. It was then I began to hear a faint humming sound that slowly and steadily grew louder and louder, eventually reaching a level that made me think my eardrums were going burst! It stopped for a brief second before a powerful pulse of force emanated from the pack and I saw a pillar of blinding white light shot into the skies. A secondary ring of energy pulsed out from the white light and stretched as far as I could see in all directions before disappearing completely.

In the dancing shadow impressions the dazzling light left on my eyes, I could see that the strange man was still standing there looking at the dead man, but something was different. The stone pillar had disappeared and the dead man was standing along, unsupported, holding a gleaming sword, as if he had been a statue of a knight in a tomb. The strange man spoke softly to the statue, “ Now uncle, you can watch over all this area, and protect it all forever.”

With a final glance, the strange man walked back into the hole he made, and it seemed to seal up behind him, like it was never there. After a few moments, I walked over to inspect the sword of the dead man- logic dictates that one shouldn’t leave a good sword for someone else to steal- and as I got close, I could see that the dead man was made of stone. It looked as though he had become a statue, though, oddly, his stony hair seemed to move in the breeze. Undaunted, I reached for the sword, but as I did, the statues eyes opened up, bright and clear.  At that point, my wits had had enough and I ran for it leaving sword and statue-man for the next traveler to deal with.

Here are our picks for the Best of our November 4th-6th event: 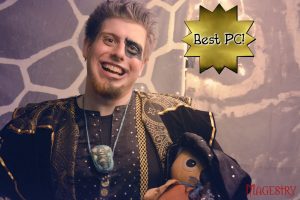 Finley was TREMENDOUSLY helpful to us.

This month’s Best PC, J.D. Bates, has really created a persona with Finley Porter that shines at game. Finley is such a different character than Bastion and J.D.’s ability to role-play very well is very evident with the switch. J.D. also works to welcome new players to the game and shows a lot of dedication to his character’s garb and personality. It is a joy to watch Finley and we are happy to have J.D. at game! Congrats!

“Finley, because he as so energetic and is a sympathetic man.”

“Finley – great role-playing as always but being able to quickly digest the situation and deal with it effectively due to being a quick thinker and very knowledgeable with his and other abilities.”

“Finley did a great job role-playing and keeping the tavern running.”

Without this month’s Best NPC this game, some of the coolest moments of the game would not have been able to happen. Taryn Thomas was ESSENTIAL in setting up the totem on the island, acquiring row boats, and helping to make sure that people got across to the island and back safely. She is always incredibly helpful before, during, and after game with all sorts of things that need to get done behind the scenes and has recently joined the plot-writing staff to help in writing the game! We are so glad that she decided to come to game! Thanks for everything, Taryn!

Another huge help with all the coolest and biggest moments at this game was Cara Backman, who gets the Honorable Mention for this month’s award. We loved having Cara back at game and she was another HUGE help with all the physical arrangements that needed to happen for the game and really helped to keep us sane as we tried to do a million things at once. Thanks for all your help, Cara! Come back soon!