Near the start of the Age of Fortune, the Portal Authority- an organization dedicated to the study, control, and use of both inter-dimensional and intra-dimensional travel on Magesta- wanted to make it easy for people (mainly of wealth and importance) to travel to and fro across the face of Magesta, and so they built portal anchors: weakened portal points reinforced through astral magic. These portal anchors, set up primarily in large and influential towns and cities, were widely used for over a hundred years with only a very few mishaps to speak of in that time. Oh, every now and again an anchor would be vandalized or overused, causing it to send someone to an unknown and unintended dimension or to simply explode, but those instances were generally few and far between and well cleaned-up. 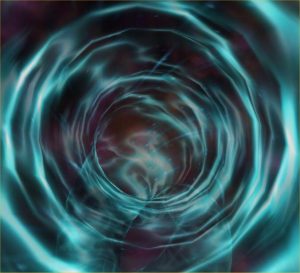 However, just over a year ago, almost the entire Portal Anchor system throughout Magesta was systemically infiltrated and ultimately disabled. At first, Portal Authority agents thought it was the result of a combined effort of a loosely coordinated group of portal jackers  known as the Ledgerdemain to shut down the ability of the Portal Authority to move quickly throughout Magesta, however, the damage was so intensive and comprehensive that they ruled that out quickly. Now the going theory is that the damage to the system was done by a dangerous rogue Portal Jacker known only as “Fury.” Though not much could be found about this rogue jacker, suffice it to say that he knew the ins and outs of not only the Portal Authority (causing them no end of grief and trouble), but the Portal Anchor system itself.

His tampering could have destroyed over 100 years of continual building and construction of this important system, and though experts are still trying to figure out why he did not complete his work, they acknowledge that “there is enough damage to be getting along with as is without trying to figure out why he didn’t do more.” Repairs have been ongoing throughout the year and though an estimated 92% of Magesta’s Portal Anchors have been reestablished and working within an acceptable dependability range (89%), there is still plenty of intensive and extensive work to be done.

For reasons that haven’t been easily explained, people have, at random, been disappearing and reappearing out of thin air! Folks from far-off, strange lands have been popping up all over Magesta, confused as to how they have gotten to those locations. Strange animals and violent creatures that are not native to the areas they have been sighted have been appearing as well. Additionally, there have been reports of people disappearing from their homes, shops, and right off of public roads all over Magesta. The Portal Authority has had little to say thus far, releasing only one statement:

“The Portal Authority is investigating this very aggressively. Although we are not convinced that portals have anything to do with this activity, we are best equipped to handle it and will do all we can. Anyone with any information or have had sightings to the effect of these descriptions should report them to the Portal Authority at the soonest time possible.”