This third report on the terrors of the Gatekeeper’s loyal servant, Carzon Sazdar, is a mixed story of death, demons, betrayal, and hope.  On the evening of the 30th day of Petalsong, the growing sounds of combat sounded from the woods in the center of Elmerton.  At the forefront was a man in a horned mask that many recognized as Lodi – a person who had helped rebuild parts of Gindinmere and provide aid to many who had suffered at the hands of the Gatekeeper.  A man who, up until mere hours before, had been considered an ally by the adventurers of Elmerton.  As his mask was lifted to reveal a wicked grin and mocking speech, it only served to confirm the suspicions that Carzon and Lodi were one and the same.

Carrying a coffin-shaped shield with a blood red glow, Carzon directed his troops and demonic allies to attack the town while he began to rip open a dimensional scar that crossed the town which had just started to heal.  The heroes of Elmerton resisted with sword and spell, but every time a large number of Carzon’s warriors were slain, he recalled them from the Gatekeeper, suspending their promised one true death in the name of necessity.  In return, Carzon lashed out with his own power, killing many who opposed him directly.  As for the demons, they continued to slip through the gap between dimensions almost as fast as they were destroyed.

Seemingly aware of the conflict, the Incarnation of Death himself established a space in the town to judge the recently departed.  At times, he was accompanied by some sort of assistant that I could not identify.  A great many spirits visited him during the night, some multiple times.  Each spirit had a hushed discussion that I could not make out, and Vorkarian consulted his dice.  More often than not, they were permitted to return, and most moved to continue the fight against the agent of the Gatekeeper.

After several hours of hearing the clash of metal and seeing the flash of spells, a cry went out for Elmerton to disengage – that someone had done what they needed to do.  Caught between wanting to investigate and wanting to live, I slowly moved towards where the noise had been the loudest, near the shrine to the Incarnation of Nature.  At the distant sight of Carzon’s glowing shield, I froze and strained to hear what was being said.  The voice of a single man spoke against the group that was led by Carzon, and though I could not hear clearly, I could tell that the tone was defiant.  There was a surge of the sounds of combat, which then quieted as quickly as it began.  The same single voice, now mocking, still spoke.  Carzon replied, sounding frustrated or tired.  After a short time, I no longer saw the trees lit by a reddish light.  The night was still.  Carzon was gone.

On Fortuneday, Elmerton celebrated their victory with music, games, and food near where Carzon was stopped.  I believe that this is the first record of defeat for Carzon Sazdar and The Gatekeeper.  I pray to the Incarnations, and especially to Vorkarian, that it is not the last.

Some may call it luck but that’s a word I would never utter with what I saw. I bore witness to the aftermath of an assault by a man named Carzon Sazdar just over a month ago, I never guessed that in my roaming wanderlust I would see one take place before my very eyes. 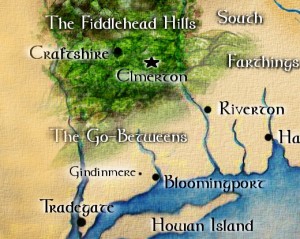 few short miles from Bloomingport. That night I just finished dinner and was enjoying a rather large and tasty dwarven ale in the Salty Maidens tavern when disaster struck.

It happened all at once- the silence of the night torn asunder by a roof rocking blast that threw a few people off their feet. The tavern emptied as did the other houses and random businesses that remained open at that hour. People poured into the center of town to see a large and heavily armed group led by a large man who stood out in front of them. Before anyone could even speak or try and make an action, the man up front spoke in a booming tone. “I am Carzon Sazdar, the slayer of worlds and the man who is not only ready, but excited to send you all to the Gatekeeper’s Realm of True Death.” He paused then to watch the effect of his words on the town. His brow furrowed slightly as he continued, “The Gatekeeper, however wishes for me to convey his intent to you so that you will know the extent of his mercy. Listen to this well!” Sneering, and drawing a well-worn scroll from a pouch at his side, he bellowed in an even louder tone,

“’Magestans. I am the Gatekeeper. I am Death Incarnate and will take my place amongst the other Incarnations. You cannot destroy me. You cannot withstand me. However, be it known that I bear you no personal hatred nor animosity. I have no desire to inflict unnecessary pain or suffering upon any individual. I am willing to offer you this chance, Magestans. There need not be premature death and destruction, but know that I will grant the spirits of this desperate and pleading world eternal and pure rest, and with that will come the Dread of War. For those with the wisdom to bow before Destiny, I will provide places of safety in which you and your families will be permitted to live safely and comfortably and to live out the natural course of your lives or until such time as I am given a seat amongst the greater Incarnations. Those who enter this stronghold will be under my protection and will know the strength of my might. No harm will come to you.

However, I will warn you that those who do not enter this stronghold will be subjected to the Sword and Wrath of my Pledged. Carzon knows no mercy and has my leave to show no quarter to stragglers and heroes.’”

Carzon leered at the town and said, “You have until this time tomorrow to make your choice, Gindinmere. Make no mistake, I will return at that time, and will show you the strength of MY might and the extent of MY mercy.”

After all this was said, Carzon muttered a few words, made a complicated gesture with his hands, and a massive swirling portal opened in the center of town, complete with an elaborate gateway conjured out of thin air. After nailing the scroll to the gateway, Carzon and his men marched out of town. A few townsfolk rushed into the portal with zero hesitation after gathering their families and the valuables they could carry. Other argued the merits of accepting the Gatekeeper as the overseer of Death. Some disagreements turned into fistfights.

When it was all said and done over half the town went into the portal. Those who stayed behind prepped for a fight. I myself found a pig iron shed that the blacksmith uses and barricaded myself inside. True to his word, Carzon and his men marched back into Gindinmere at roughly the same time and unleashed a horror that the Abyss would be jealous of. Men, women and even children fell to their blades. Any building used as shelter was burned to the ground. There was no stopping Carzon and his men. I was literally the only one left alive as the portal in town began to pulse and then closed.

One of his men found the shed I was hiding in and tore the door open with alarming strength. He raised an axe to my head and was about to strike until Carzon himself grabbed his arm. “Ahh a roving scribe,” he said in a tone of voice full of poison. “No! She gets to live, no point in letting the story of a lifetime go untold. Run off little one and tell all what you have witnessed here.”

After letting me live to escape, he let out a whistle and his men formed up and marched out of town. He followed behind them with strong strides and left the town in ruin. When they left I quickly dashed away.
I can speak no more of the horror I witnessed…