The Sacred Boneyard of Aegus the Emancipator. Sounds grand, doesn’t it? Well, after having heard about this place being debated about for the last few moons and after having had a particularly vivid dream about it, I decided to go see it in person. I spent a week or so getting to the Bay of Murmurs and then, because its location wasn’t precisely specified, it took me another few days to actually find it (about 35 miles SSW of Battlekeep- not quite on the shore as I was led to believe). I was a little surprised to actually find it (and now owe my guildmate 2 gold for losing our bet), but there it was- almost exactly as I saw it in my dream.

I entered through the ornate gateway and immediately I was overcome with a sense of peace and tranquility. It was in that graveyard that I faced the awesome Sacred nature of Death in all its purity. I walked among the gravestones for a few hours (it is that big!), some of which were hundreds or even thousands of years old, and contemplated what it meant to be here and alive amongst these hushed and peaceful bodies.

Darkness came more quickly than I was expecting and I found myself unable to find my way to the exit. I walked further and eventually it became so dark that I could see absolutely nothing. I’m afraid I lost my head a little and began to run carefully down what seemed like a path.

After an indeterminate amount of time, things began to get a little lighter and my pounding heart started to slow down to near normal. I looked around and found myself in a part of the graveyard that… well, just didn’t make sense. In fact, as I continued my search, I found that I was in an entirely different place. It was warmer and wooded, and the smell of the air was different. Additionally, the dozen or so gravestones in the area were not surrounded by a stone wall or any sort of gate. After wandering for a bit more I met a man named Byron who told me that I was in the town of Elmerton- a small township in the Fiddlehead Hills- over 600 miles from where I had been. He tried to reassure me over a cup of strange tea made over a modest campfire that this was not entirely unexpected and that he had been working with another man to create a pathway through the Evernight Forest (Yes, you read that correctly: The Evernight Forest) and that it looked as though one had been tentatively established- even if it did bring a bit of the other side through. “Oops!” he said in a tone that barely masked his glee.

I was unnerved to say the least and didn’t wait around to hear much more. I thanked Byron for the tea and took my leave that day to head back home. It seems, then, that this peaceful graveyard exists simultaneously in two different places and that all this has to do with the Evernight Forest and a strange bearded man and his unknown accomplice. The next time I go searching for legendary sites or people, please remind me not to.

Here are our picks for the May 29th-31st event: 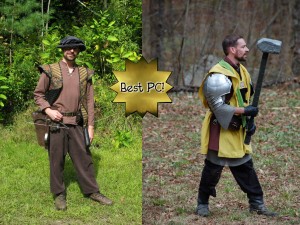 Role-playing with Mark always ends with great and enjoyable encounters.

This event’s Best PC is someone who has contributed to the game in so many different and absolutely essential ways. Magestry would not be the same place without Mark Dey who plays two very different characters over the course of the weekend: Felix and, of course, Rakesh the Smith. There are not enough good things that we can say about Mark’s hard work and loyalty to the game, but he has also continuously proven himself to be an outstanding role-player, an adept tactician, a dedicated and enthusiastic PC, and a great role-model and mentor for newer PCs. We were especially impressed this game with his passion and energy during the Carzon fight and his push to get people to stop him. It is an understatement when I say that this game would definitely not be the same without him. Congratulations, Mark, and thank you.

“Mark Dey as Felix is the trippiest thing I have ever seen at game. It is such a far cry from Rakesh and a great example of moving from one character to another, and making your new PC different from the previous.”

“Felix, because he was comedic with the fae baby and was an overall good player.”

“As always, I enjoyed interacting with Rakesh.”

We also want to include a Best PC Honorable Mention for  Tom Sadler as Kai. Tommy is another veteran player who is consistently helpful and a top-notch role-player. Even though his time at game was limited this event, he still managed to impress quite a few folks. Thanks, Tommy!

“Looking back over past PELs Helik always seems to wind up here, and with good reason. He is always spot on, in game, and extremely believable. Typically I use him as an example of a high water mark of a player. ”

“Kai for being another old guy to complain with.” 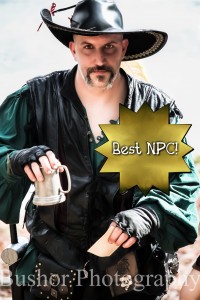 Jeff did a great job in a dangerous and important role!

This event’s Best NPC has recently started to show his chops at Magestry from plot-writing to role-playing and this event, Jeff Pennachio did a great job in his starring role! Jeff has been an enthusiastic and dedicated presence at the game for a while and has added a lot of LARP experience, wonderful costuming, and interesting ideas to Magestry as a whole. We are happy to have him on staff and are excited to see what the future holds! Many thanks, Jeff, and congratulations!

“Jeff Pennachio as Lodai/Carzon was superb. By the time the town grew suspicious it was too late. An excellent long-play.”

“Jeff Penache! I loved the way he showed his versatility off this game. From the big bad Sazdar to the talkative and polite pirate friend of mine. Awesome guy to have walked beside this game.”

This third report on the terrors of the Gatekeeper’s loyal servant, Carzon Sazdar, is a mixed story of death, demons, betrayal, and hope.  On the evening of the 30th day of Petalsong, the growing sounds of combat sounded from the woods in the center of Elmerton.  At the forefront was a man in a horned mask that many recognized as Lodi – a person who had helped rebuild parts of Gindinmere and provide aid to many who had suffered at the hands of the Gatekeeper.  A man who, up until mere hours before, had been considered an ally by the adventurers of Elmerton.  As his mask was lifted to reveal a wicked grin and mocking speech, it only served to confirm the suspicions that Carzon and Lodi were one and the same.

Carrying a coffin-shaped shield with a blood red glow, Carzon directed his troops and demonic allies to attack the town while he began to rip open a dimensional scar that crossed the town which had just started to heal.  The heroes of Elmerton resisted with sword and spell, but every time a large number of Carzon’s warriors were slain, he recalled them from the Gatekeeper, suspending their promised one true death in the name of necessity.  In return, Carzon lashed out with his own power, killing many who opposed him directly.  As for the demons, they continued to slip through the gap between dimensions almost as fast as they were destroyed.

Seemingly aware of the conflict, the Incarnation of Death himself established a space in the town to judge the recently departed.  At times, he was accompanied by some sort of assistant that I could not identify.  A great many spirits visited him during the night, some multiple times.  Each spirit had a hushed discussion that I could not make out, and Vorkarian consulted his dice.  More often than not, they were permitted to return, and most moved to continue the fight against the agent of the Gatekeeper.

After several hours of hearing the clash of metal and seeing the flash of spells, a cry went out for Elmerton to disengage – that someone had done what they needed to do.  Caught between wanting to investigate and wanting to live, I slowly moved towards where the noise had been the loudest, near the shrine to the Incarnation of Nature.  At the distant sight of Carzon’s glowing shield, I froze and strained to hear what was being said.  The voice of a single man spoke against the group that was led by Carzon, and though I could not hear clearly, I could tell that the tone was defiant.  There was a surge of the sounds of combat, which then quieted as quickly as it began.  The same single voice, now mocking, still spoke.  Carzon replied, sounding frustrated or tired.  After a short time, I no longer saw the trees lit by a reddish light.  The night was still.  Carzon was gone.

On Fortuneday, Elmerton celebrated their victory with music, games, and food near where Carzon was stopped.  I believe that this is the first record of defeat for Carzon Sazdar and The Gatekeeper.  I pray to the Incarnations, and especially to Vorkarian, that it is not the last.