In late autumn of the year 2004 AoA, one of the lesser known battles of the Partisan War took place just a few miles east of the border between Irvanshire and Tohmshire, along a ridge of hills in The Go-Betweens. An elite force of knights from the Kingdom of Lowex, only 90 strong, attacked an Irvanshirian encampment manned by a company of almost 900 of the kingdom’s soldiers. The battle resulted in a perfect stalemate despite how outmatched the Lowexians should have been. There were heavy casualties; both sides, it is said, were killed to the last man. 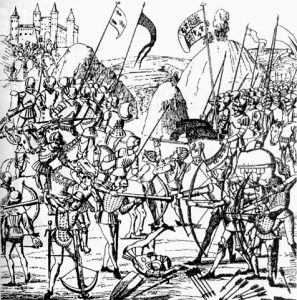 The Partisan War, up to that point, had been primarily fought between the kingdoms of Irvanshire and Tohmshire. Lowex had only recently gotten involved, mostly politically, on the side of Tohmshire. Some say the Incarnation of War, weary of all the saber-rattling between Irvanshire and Lowex, had incited the encounter and bestowed upon its battlefield a blessing of great morale under which both sides were affected. So much blood was spilt on that day that when the short-lived battle was over, the very ground upon which it was fought was stained a deep crimson and had remained so for more than a century. It is also said that the spirits of those who were slain during the battle still haunt the site in search of the victory that never came. Truly a forlorn memorial that so few of this generation even know exists.

So why, now, do I teach this little-known lesson in history? I do so because I am not the only one who remembers the Battle of Red Ridge. Recently, others of ill intent have returned to the forgotten battle site under the cover of night and invoked dark and unholy magic upon its crimson soil. Eye witness accounts report of such things as “…ebony fire raining down from the sky” and “…crimson lightning exploding from the ground” and of “…the very earth crying red tears of pain and sorrow” accompanied by “…a cacophony of mournful wails escalating into the chorus of a rage-filled battle roar of an army of the damned.”

But, these were all things scried from afar by old men wearing long white beards and silly conical hats emblazoned with such things as shooting stars or lightning bolts. What was actually discovered by those who were tasked with investigating such colorful claims was far more unsettling. The foregone battlefield was indeed desecrated along with the surrounding hillside on which it was fought. All plant and animal life found there had been drained of all Essence, and the landscape was as barren, as though Death himself dwelled there. Furthermore, all across the battlefield, the earth had been scorched and pockmarked and lay turned over in heaping mounds, and an acrid mist reeking of the grave clung to the ground which no longer maintained its blood-colored tint. Instead, the soil is said to appear as grey and cold as a lifeless corpse.

Further exploration of the site uncovered the tracks of what could only be described as a large force whose numbers could not easily be estimated. More perplexing was the fact that this reputed force divided into three fairly equal squads before marching off in different directions and, when followed, each led to the lands of one of three of Irvanshire’s noble houses… House Brexiano, House Camis, and House Falstoke.