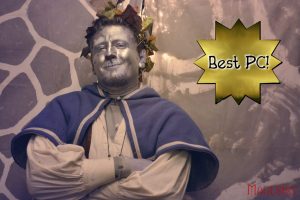 Sandow, since he got to be an incarnation and didn’t let it go to his head.

This month’s Best PC is a wonderful guy with a heart of gold and a strong, if sometimes subtle, presence at game. Jesse Lemieux as Sandow has really shown us the depth of his role-playing ability recently and has always worked to be a welcoming and helpful person at game. Additionally, he is always a safe fighter and we are glad to be able to recognize him here! Thanks so much, Jesse!

“Sandow takes it this game for me! He kept very true to himself even put in the crazy position of an incarnation! Anyone who can do that and not break their values with the new power is impressive to say the least.”

“Sandow was adorable in his discomfort with the incarnation of community thing.”

“Sandow. I just think he did a great job not only as the impromptu Incarnation of Community, but he was wonderfully in character throughout the entire event.”

“This one will have to go to Sandow this time, his role-playing while the incarnation of community was fantastic, as well as his reactions from the baking contest!” 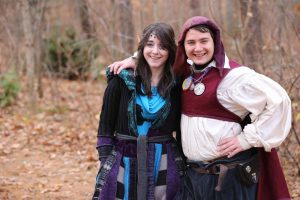 Mira and Majento and Simon did a great job hosting and organizing the different events for the harvest festival they put on this game.

We would also like to add a huge “Thank You” to Amanda Mooney and Anthony LaRosa as well as the rest of the Aces crew for putting on an amazing Harvest Festival. They wrote and coordinated each of those events and pulled them off with great aplomb and then helped out a ton with making a beautiful and delicious dinner! It was a lot of fun and we are very grateful for all the hard work! Thanks, guys!

“Amanda and Toner as Mira and Majento. They did an amazing job as PCs with an almost decidedly NPC role, hosting multiple events for PCs as well as helping prepare dinner for everyone and hosting it as well, all the while staying in character.” 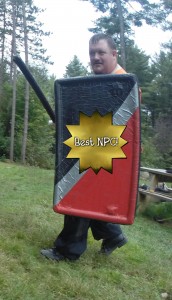 Nick. He spent a great deal cooking and still made time to go out and be interesting characters

This month’s Best NPC is not a newcomer to this particular award! Nick Donoghue is a rockstar on staff, always helping and always ready to do what needs to get done. You all know how well he role-plays, and let’s not forget his amazing culinary skills that he lends so graciously to us! We are super lucky to have him on staff. Thank you so much, Nick!

“Nick when he was playing Sir Xanthos. The emotion he put in his role-playing was breath taking, I felt the pain he had.”

“Nick – Dude doesn’t stop, he’s always doing something and it’s almost never the same kind of thing. When he NPCs a monster he adjusts his fighting style to match the flavor of that monster. And his food… is magestic!”

“I loved the Wilhelm moments this game.”

“Xanthos, I never thought that he could get that pissed.”

“Nick as Sir Xanthos for being an important mentor for Linarien, and a believable performance and table flip after finding out some important documents were given to the wrong people. Also Wilhelm, he’s always great to see in town, always helpful.”