in the wee hours of the morning on the last night of Stillbreeze, I passed through your town as part of a normal patrol. I was witness to something I thought you should be made aware of. I had been looking at the ritual spot that had been created in front of the Allegiant Hall when I heard someone approaching. The rattle of bones and the putrid stench of the recently dead made it apparent that whomever was approaching was doing so with a group of undead. I backed into the shadows and kept watch.

Two men with the mark under their left eyes that identified them as a Remeika came and stood in front of the site. Calling out to the Exiled One and using power directly borrowed from him, one of the men said a series of incantations and cut his arms, bleeding profusely over the site. Finally, he cast an extremely powerful summons to rise and serve his Master and the ground beneath him trembled and broke as a creature similar to the Grave Elementals, but created from the bones and objects of the site, crawled out and stood before him.

The necromancer looked over his creature appraisingly and then ordered his whole group to follow him. I followed them quietly and watched as the same thing was repeated at the ritual site between Lower Cabin and the entrance that leads to the Southern Woods.

After both his creatures had been raised, he gave them instructions to seek out the Guardian, Azareth, and kill him. The creatures lumbered away and the necromancer looked to his companion saying, “If it hadn’t been for him, all three would have been completed with ease.”

With that, the necromancers and their group of undead walked out of town. I sent word as quickly as I could to some of the other Waywatchers in the area, so I doubt they made it very far. However, all the same, it is likely that this Azareth is in trouble and I thought you should know about it. 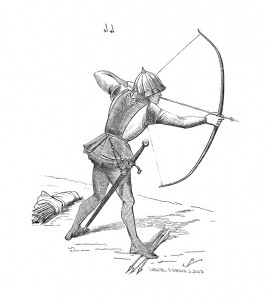