Here are our picks for the Best of the October 13th-15th event: 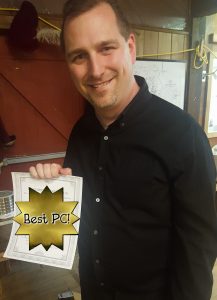 This event’s Best PC goes to Nate Carr for his beyond epic performance of Future Stiles.

Nate is already well known for his Great role-playing and fighting as Stiles Silvermist but this past event he truly outdid himself in his portrayal of himself from a rather bleak future. From being able to handle the weight of his grim message from the future and his use of his vastly expanded skill tree he had a performance for the ages and proved yet again why he is one of the more dynamic players we have at Magestry. Even when he’s not superpowered, he is a delight whether it’s holding fighting lessons in game, or just hanging out and talking, we enjoy his company.

“Nate was super helpful throughout the event”
“Super Stiles – did an awesome job role playing his visions and is overall concern about the outcome of the future.”
“Super Stiles, it was nice to have someone super powered to rally behind” 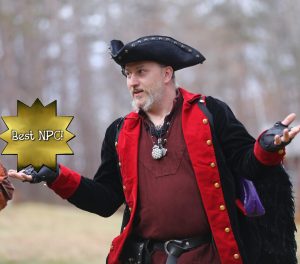 And your Favorite NPC this event was Jeff Pennachio!! Jeff is a vet in the LARP game and strives every event to uphold a personal standard in hopes of making the game enjoyable for everyone he encounters. But let’s not let that dissuade us from his sinister plots. Whether playing the big baddie or the nicest guy in town Jeff is a delight to the game. Even when he’s worn down, broken, and tired, he pushes through the pain to keep going out and crunch or roleplay so you can all enjoy yourself.He tries to keep his fighting as safe as possible in all conditions that the camp has thrown at him. He’s also been a help in trying to keep the morale up in Ops. For all of these reasons, Jeff we tip our metaphorical hats to you. Thank you for everything you do.

“Boom did a great job expressing the mix between sadness due to the loss of Bosephus, abandonment by Elmerton and anger all at the same time.”
“Jeff is always a pleasure to cross blades with.”
“I loved roleplaying with Jeff. Usually its just combat, but I got to actually see some other sides to his characters.”
“Jeff – I can’t express how much I appreciate how awesome of a job Jeff does.”