Here are our picks for the “Best of ” the April 29th-May 1st event: 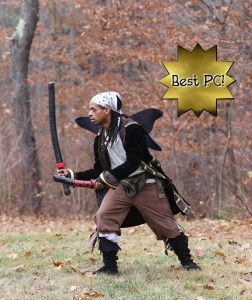 Sebastion really stood out this game. His role-playing is always fantastic, but it was nice to see it showcased!

This event’s Best PC is none other than the Two-Years-Running-Town-Scoundrel/pirate faemin, Sebastian Dark played by Marque Sterling! Marque has been with Magestry for a while now, and we have had the pleasure of watching him grow as a role-player and as a valued member of our community. Marque has consistently showed dedication, loyalty, and helpfulness to the game, whether it’s flying from Washington D.C. to play (!!), NPCing for us for a while, or staying to help clean up whenever he can. This game we really got to see Marque’s role-playing skills highlighted, and we were duly impressed. Thanks so much, Marque, and congrats!

Here are some things you had to say about Marque’s performance this game:

“Sebastian – Awesome job role-playing a variety of emotions this event!”

“Sebastian did a great job with his angsty plot.”

“Sebastian for roleplay, not just for the major drama with Donovan, but also consistently throughout this event.”

“I feel this event Sebastian deserves special recognition for his role playing when it came to Donovan and Amelia. He did a very good job of showing how hurt he was at what was transpiring.”

“Speaking of Marque, his roleplaying this event was fanTASTIC. He was legitimately distraught after the events of Friday night, and I overheard his and Silver’s conversation. It was very charged, and Marque showed some damn chops. He kept this up the entire game, especially when Donovan showed up again Saturday. I pretty much hung around just to watch him work. Very worthwhile.”

“Sebastian was my favorite PC. His role-playing shone brightly the moment he realized he could blink through the circle of protection and attempt to kill the Morticent, realizing that it was actually Donovan, and every moment afterward all throughout the weekend.” 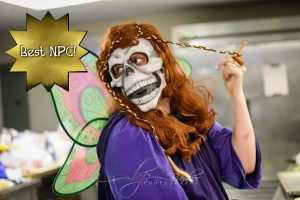 Dave Kopchick. The man was everywhere this weekend. Fountain of energy which I think helped keep the awesome train going this weekend!

This event’s Best NPC is, again, not a stranger to this particular accolade, but he is another NPC who truly deserves this award. Dave Kopchick was a whirlwind this event (and in the weeks previous to the event) helping to write plots, getting up early to put out speaks and spots and/or do early morning lessons, leading crunch squads, and generally helping to make sure that things ran smoothly throughout the weekend. Dave has become an integral part of the staff and we are sure happy that he decided to do so. Thank you so much for all your help, Dave!

“Kopchick with his variety of roleplaying and adding bits of non-essential, but environment enhancing little plots. He is always so wonderful!”

“Hanging out with Dave all morning as Baxter was a great time. I know Dave put a lot of hours into that component lesson.”

“The goblin that learned literacy with Dogwood. It was very comical and memorable.”

“My absolute favorite NPC this event hands down goes to Dave Kopchick. Hands down, without a doubt. He tackles each role with everything hes got, whether its a silly NPC like Gigglefritz, or a more tortured soul like the Emancipator, or even just as a crunchie. He has this enthusiasm about the game that is so blatantly clear and very nice to see. We are very lucky to have him back.”

“Baxter was certainly a fun npc to be around the excursion Sunday morning for components and his cheese lesson were both entertaining and informative.”

“Does Dave sleep? I think probably not. He is an unstoppable force of nature and I think has been a great addition to the game since he’s been back.”