Here are our picks for the “Best of ” the April 1st-3rd event: 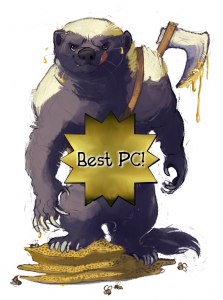 This is what Francis might look like. Pictures of this rare mongrelian are hard to come by!

This month’s Best PC is a veteran player who brought a new character into game this event. Though we usually associate Steve Pulaski with his first character, Cael, we saw a whole new side of him with his portrayal of Francis! We have always known Steve to be a good role-player, but we were really impressed with the big changes that were made from Cael to Francis! Everything about the character was different and fun to react to. Steve was also a wonderful help before and after game, staying until the end to help clean up! We are very grateful for all his work. Thanks, Steve! Great job!

“The fella who was a badger mongrelian rocked his role-playing, even progressing/growing his character before our very eyes.”

“Francis was alternately terrifying and hilarious, not that it would be nice to laugh at him.”

“Francis – It was so cool to see Stephen play this role and he did so well keeping in character and continuously questioning words and phrases and talking about hunting and such.”

“Francis (Steve Pulaski) when phenomenal, A clear departure for Cael, he was great to see in character, had great costume and props, including a plush skunk stuffed with jerky. He did a great job role-playing learning words from a small vocabulary.”

“Francis was my favorite PC. He was so different than any other character in town, his personality and attitude were refreshing, and he was great to interact with.”

“I really liked Francis the Honey Badger. Steve brought some amazing role-play abilities that we don’t always see with Cael and it was interesting seeing all of the people in town react to him.”

“Felix the honey badger was an awesome PC to interact with, very entertaining.” 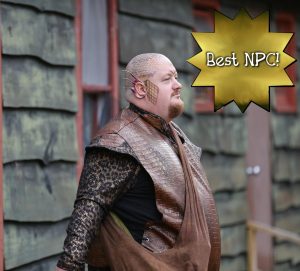 Nick D – Lots of fun to fight, dude has a huge heart. Great cook too!

This month’s Best NPC is not new to the title, but he has certainly been a person who has raised the bar for Best NPC to high heights.  Nick Donoghue has proven himself to be consistently one of our best NPCs whether it is through his wonderful role-playing, extreme helpfulness, cheerful and positive attitude, incredible cooking skills, or his eagerness to help grow our game. We are so lucky to have Nick on staff here and we know that you feel the same way! Thank you, Nick, for everything you do!

“Nick- role-played amazingly also did a great job being a grave golem.”

“Nick is a superstar. Always.”