Here are our picks for the “Best of ” the November 6th- 8th event: 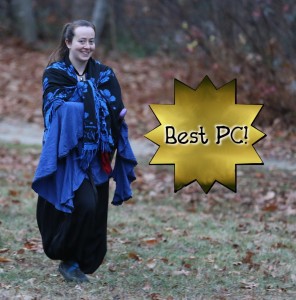 Lilly was definitely this game’s best PC for leading the town.

This month’s Best PC has been with us and has been playing the same character for 11 years! Whitney Sternberg as Lilly has been a notable and wonderful PC during that time. We had the pleasure of watching as Whitney really came into her own at Magestry, and we have been continually impressed by her dedication to her character, her role-playing experiences, and the game itself. This game, too, left us impressed and grateful to have been able to have been a part of the storyline that Whitney helped us weave. Though we are looking forward to her new character and to the new stories and characters she will undoubtedly bring to the game, we would also like to bid a fond farewell to one of the few remaining folks from Elmerton’s early days. Whit, thanks for all you’ve done for the game! We’re looking forward to future interactions!

“My favorite PC was Lilly. I have never spent any time with her before and I got to know her a lot better this game. I got to go on a secretive plot with her and she gave me some pointers and tips and things to work on which I found very helpful and informative.”

“Lilly was also very helpful this game, answering a lot of in-game questions I had and inviting me to a secret organization I am still not sure if I want any part of.”

“Lilly. Besides this being her last game, almost every plot point I was involved in, she was as well, which showed me how deep her roots were.”

Jeff is always tops when it comes to PC-PC interactions.

This month’s Best NPC was technically not an NPC, since he paid to PC the event, but given the amount of time and energy he gave to us over the course of the weekend, he might as well have been! Jeff Mitchell was an incredible help to us this event. He played several important roles incredibly well, helped us write plot, and even gave us some crunchy time in between plots. Jeff has consistently been a HUGE help to Magestry, an incredible role-player in all his roles, and a truly snappy dresser, putting thought, time, and energy into each of the characters he plays. He does all this selflessly and with the intention of making the game even better. Thank you for all your hard work and energy, Jeff! We truly appreciate it!

“I am picking Jeff this game. I feel like I just expect his amazing character portrayal, but he really brings it to the front sometimes. I like him because he is always responsible, safe, and involved.”

“Oliver – he has a mastery of diplomacy and political interaction that I admire.”

“Jeff Mitchell – per normal he was exceptional, and great at helping out via NPCing.”