Here are our (slightly belated) pick for the Best of the May 27th-29th Event: 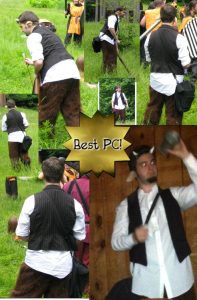 Dogwood because he’s just so interesting and fun to interact with.

This month’s Best PC has become an Elmerton favorite. With his punny sense of humor and overall sense of wonder, innocence, and curiosity, Dogwood, played by Alex Fabian has brought new life to a town jaded by turmoil and huge problems. Dogwood is such a wonderful character and he is played by an equally wonderful person. Alex has been a very helpful member of the Magestry community, helping before, during, and after games, often times staying until the very end. We are very glad that Dogwood was given a chance to shine since it meant that we also got to have Alex back at game. Sadly, most of the pictures we have of Dogwood are of his furry backside, so here’s a Dogwood’s Derriere compilation. Thanks for everything, Alex.

Dogwood is consistently awesome. His immersion, role-playing, and non-traditional style just always gets me. Like, he is OK hiding from most fights, because he doesn’t have to fight. He is just awesome.

Dogwood did a great job this weekend with being briganded nearly twice and was generally fun to hang out with.

Dogwood. Watching him be scared of the hit squads coming after him was entertaining, and watching the town rally to protect him was endearing. He is also hilarious in general, and a joy to be around.

This month’s Best NPC is a little out of the ordinary for this post. However, after an 11 year “Best of” dry 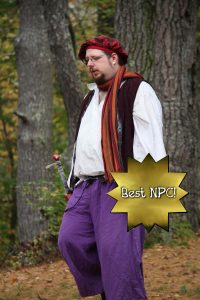 spell (read: being a Game Master), and since the PELs have declared him such, we would like to commend Mike Faulk for his altogether impressive ability to be able to entertain his players and help to keep the game running smoothly. Though we don’t usually include GMs in this post, I thought it was high time to recognize Mike for his dedication and seriously hard work that he does for this game. Mike has helped develop and balance the rules, writes thoughtful and entertaining plots, and over the years has helped to create and maintain our community. You can even still read the Livejournal that we used (and that Mike built) before Facebook became hip. Mike is a huge part of our community and he continues to do wonderful things before, during, and after each event. Thank you, Mike! <3

Mike Faulk, as always, has impressed me with the quality and thought that gets put into every plot he writes. Every character he plays is engaging and completely fleshed out. Like an onion, Mike’s characters have layers. They will also make you cry.

Zombie for one because I never though I would see a zombie apply for a job at ACES (Zombie would make a great bouncer though).