Here are our picks for the September 16th-18th event: 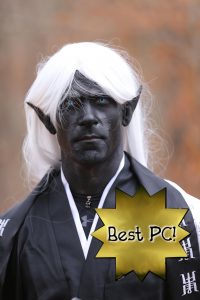 This month’s Best PC is a veteran player with a love for playing characters in full makeup. Whether he’s a golden ray of light or a shadowy ball of emotions, Peter Dey as Silver is an great role-player. It is exceptionally rare to catch him out-of-character during game, and his stoicism broken by random and unexpected bits of humor makes him a likeable, if somewhat intimidating character. Pete has always worked to bring in new people to the game and always tries to make sure to help set up before game and clean up afterwards. His enthusiasm and kindness are noticed and appreciated by all. Thanks, Pete!

“I found myself unable to stop watching Silver as a newcomer. While [he is] on the quiet side of things, I don’t believe I ever saw him drop character.”

“Silver, while he was quieter than usual it showed that his character had some deep troubles going on.”

“Silver does a great job of staying in character, has an amazing costume and overall is a pleasure to role-play with.”

“Silver always plays a good Silver and I was more in awe of him this game than usual.” 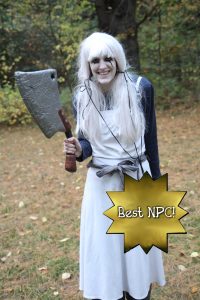 This month’s Best NPC is always a breath of fresh air whenever she comes to game and is ready and willing to do whatever needs to be done. Talya Goodman is a wonder behind the scenes. She is equally as able to play a serious character as she is able to make your tummy hurt from laughing so much and she is a fun and safe fighter who will crunch at the drop of a hat. We are always thrilled to have her at game and are thankful for all the help she gives when she is there. Thanks, Tal!

“Talya. Hands down. She brings humor into situations which really should be terrifying.”

“Talya Goodman. She’s always fun to fight and to RP with. She plays a great nipper and her enthusiasm is infectious.”

Honorable Mention for Best NPC goes to Amanda Mooney in her role as Rebekkah Skye on Friday night! We were absolutely thrilled with her performance, and so were you!  Check out what you had to say about our Miss Mooney:

“Rebby Skye-(the woman who tried to become the Shadow Queen). She seems like a powerful long term villain, who has goal, personality, and a commanding presence about her. She makes a good Evil Queen figure, even if she is not yet a queen (just don’t tell her that to her face).”

“Rebekkah Skye, she just had this aura of power, but combined with that calm, sweet tone and overall scariness I have to say she was the best npc character.”

“Rebekkah Skye. She put off this aura of menace and tension that was phenomenal.”

“Rebbie Skye was very well done, the coronation was very tense and her discussions with the townsfolk and npcs was very captivating.”

“Amanda was soo believable as Rebby Sky, which is great because Amanda is such a kind soul. Amazing role playing.”

“Rebby sky. even though my character hates her, Amanda does a wonderful job playing her.”