You have been cordially invited to participate!

Congratulations! Elmerton has been officially invited to participate in the 300th Annual Irvanshirian Smozzenpaunse Brownie Village Building Tournament! On this monumentous and historic tricentennial, we are inviting non-Ogrelings to participate in this Official Tournament for the very first time, and you Elmertonians have been deemed worthy of entry.

Over the past two years, you have been unknowingly watched and judged by two separate individuals who have witnessed the spirit of Smozzenpaunse within you all and the hard work, patience and dedication required to excel in the village building process. And so, on the words of Morvan Roundtusk of the Roundtusk Ogreling tribe and Gurunk, ogre shaman in good standing to The Furies, you have been judged worthy of entry from this year and stretching on ever-after.

Smozzenpaunse Eve falls upon the 9th of Enlightening — that’s Wakingday to all you people who don’t use calendars — so it is imperative that your village has finished construction be the end of the night on Wakingday so the Brownies can come and have their OWN festival and stay in your village. On the morning of the 10th of Enlightening we, The Brownie Architecture Judging Committee, will arrive in town to listen to your explanation of the village before we head on our way to other places throughout Irvanshire to judge other villages. Ensure that your Foreperson is present to provide names and other information, else your chance to win will be forfeit.

Remember! Brownies like their villages off the beaten path, usually in a shaded grove with or without water. All construction should be made of natural materials found in the local wood, else the brownies will shun the village itself. Brownies are a secretive, mysterious folk the size of your thumbnail, so do not try to catch one; they WILL outrun you.
So avoid the sweltering Enlightening sun and spend some time in the cool shade performing some calming, peaceful tasks. We look forward to see what you are all made of; we’ve heard nothing but good!

The Fae Realm is in an uproar due to the recent actions of the fae Queen of House Tierian. Over the course of the last year, House Tierian has become more and more chaotic as they witness the decline of the mental and emotional state of their Queen, Queen Leanhaun. Reportedly this began after the Ayslee celebration in the 122nd year of the Age of Fortune. Leanhaun, having left the Fae Realm to celebrate on Magesta, returned in a state of pure wrath, killing and injuring many of her subjects before ordering the kidnap and imprisonment of dozens of human men. The men were brought to her private chambers, and though none there will bear witness to the atrocities committed, many say the walls of the palace echoed for days with agonized screams.

However, to the subjects of House Tierian, this was better than what was to come. As the Festival of Souls meandered through Boneharvest, Queen Leanhaun began a transformation that would allegedly leave her unrecognizable to her subjects. She left the Fae Realm for an undisclosed location, abandoning rule of her house for many months (by Magestic Reckoning), and leaving it in a state of nearly unbridled chaos. When she returned, she had changed so much that few of her subjects even recognized her as their Queen.

Since that time, her grasp of leadership in her own house has been tenuous at best, and it is only with the help of a few loyal fae that she has managed to maintain it at all. Even those helping her say it is a struggle to maintain any sort of rule over the house;

“She doesn’t care about anything and she exudes an aura of apathy and despair. Most days she refuses even to leave her chambers. It is not fitting behavior for a fae, nevermind a Queen… but… uh, don’t tell her I said that!”

But her apathetic disposition is not the worst of it. In the last few weeks, after leaving the Fae Realm to wander Magesta proper, Queen Leanhaun is reported to have pledged her allegiance and that of House Tierian to the Vampire Queen Amphelise. As if that wasn’t bad enough, she has allegedly promised this Queen of Abominations a welcome place in the Fae Realm! Though her allegiance has not been solidified as of yet, it is the fear of all the Fae Houses that she intends to complete the necessary ritual during the Festival of Souls, using the ritualistic powers of the Ayslee ceremonies to empower it further.

It is my hope that this letter will serve to give people warning so that her plans may not succeed. It is my hope that my writings can serve to hold House Tierian together until such time as a new Queen is established or Leanhaun is returned to her former self. I will do what I can from my end; will you not help from yours?

The summer grows old and feeble like thousands of summers before.  The faelings lay exhausted, their tireless efforts resulting in a thriving forest, bountiful harvest and months of warmth and joy. However, their efforts have left them too tired to make the trek home.  As is often the case, we are in a position to assist.  Having enjoyed the fruits of their labor, let us do them the favor of ushering them from our world. 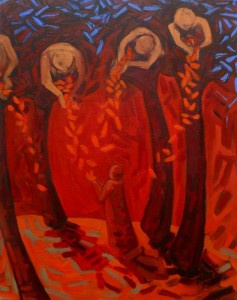 Ayslee is not a celebration.  It is a solemn time of remembrance of the losses we have suffered, in their entirety but especially over the last year.  We have lost friends and family, seen strangers fall when we might have saved them, left behind parts of ourselves and in some cases had our perceptions of self obliterated.

So we meet as we do every Ayslee, at the Fae circle on Wakingday.  This year, the intention is to begin after dusk around 10pm.  The time will be somewhat flexible to accommodate certain surprises that may have been promised by certain Queens.  The time will be announced before the ritual begins.  You should come with a fae doll and an attitude befitting of a ritual of loss.

Last year we went beyond the standard ritual to honor Fae of watery decent by burning a doll in a paper boat upon the lake.  This year, we will be honoring the air or earth as determined by nature herself.

Join us in the grief of goodbye. 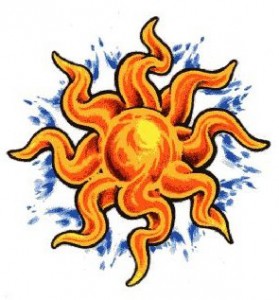 Some of this is going to sound real familiar but keep reading.  There are new details that you would be Ashynnied crazy to miss!

House Morlaix and yours truly are hosting an event on the twenty fifth day of Petalsong in honor of House Irune.  You are all invited.  I have that kind of sway. However, events are lots of work and I am looking for anyone willing to assist to contact me as soon as possible.  I would appreciate some servants, some music and a herald.  Do not fear, servanting will pay pretty well in magic, coins and gratitude.   We can work out how much of each you require later.   There will be food, drink, games and prizes.  Bring some food and drink if you want to partake.  House Irune of course need only bring their fiery selves!  If you have ideas for a game you want to run or entertainment you want to provide, do tell.  You can never have too much fun.

There will be a prize of a fine shirt.  It is a deep sanguine red that evokes images of flame and combat.  It would fit a range of individuals from men of moderate size all the way up to Battlekeep extra, extra muscly.  The shirt will be raffled.  Each member of House Irune will receive a ticket.  Fear not towns members and servants.  There will be additional ways to EARN tickets.  For one, you can help make the party successful by helping setup or cleanup.  For two, you can bring more than your fair share of goodies.  If you can’t bring anything and don’t want to help out, it is polite to ask before you take anything and to only do that after everyone else has been served.  For three, you can take a spicy eating challenge.  But don’t do that.  It will be terrible.

Because I like to paint swords, I offer a second prize.  Those

interested in a painted weapon can submit a theme for me to create.  I can either paint your current weapon or buy a sword and paint that.  An example of a theme could be “Spring” or “Dragons” or “Armpit”.  I will determine theme finalists and the crowd will determine the winner by volume of applause and other noise.

House Morlaix and yours truly are hosting an event on the twenty fifth day of Petalsong in honor of House Irune.  You are all invited.  I have that kind of sway. However, events are lots of work and I am looking for anyone willing to assist to contact me as soon as possible.  I would appreciate some servants, some music and a herald.  Do not fear, servanting will pay pretty well in magic, coins and gratitude.   We can work out how much of each you require later.  There will be food, drink, games and prizes.  Bring some food and drink if you want to partake.  House Irune of course need only bring their fiery selves!  If you have ideas for a game you want to run or entertainment you want to provide, do tell.  You can never have too much fun.

The Story Queen of Northeast Aszuron, Caressa Delphinne, has recently made the decision to name the Springtime Fae Festival that is generally recognized throughout Aszuron, and many other places on Magesta as well! This festival celebrates the onset of spring and the celebration of the New Year through the creation process, the playing of games, and the blessing of the land. Participants join together as couples to create a fae doll out of various new-grown grasses and twigs, which they then name. After playing a game with one another, the couple will hang their doll in the woods as an offering to the Fae. It is said that if the fae approve of the faeling, they will take the doll, bless the land, and give the couple a gift in return.

Though popular among farmers and townsfolk, this festival has not had a proper name- until now. Caressa has decided that this celebration will be called, at least among the fae of this area, the Festival of Ayawe. Let us usher in the New Year with celebrations of Life, fun, and blessings galore!