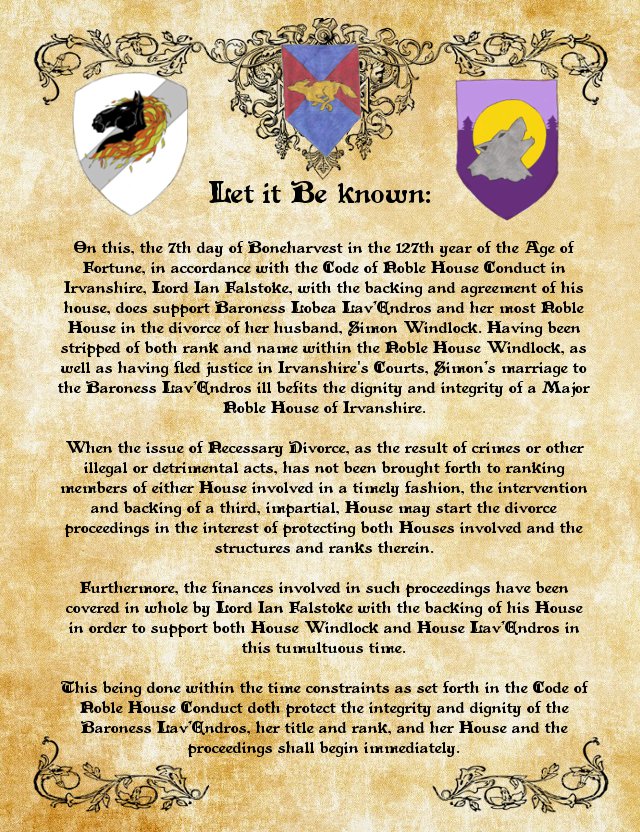 A chorus of wild howls mixing with the pounding of drums echoed throughout the barely thawing forests and told wanderers that the Banta Kinswae- a tribal organization of wolfkin led by High Chieftess Lynsara Wolfstone- were in the midst of a ritual to welcome the New Year. As the ritual came to its climax, a single figure strode into the center of the ring of frenzied wolfkin. Her blazing eyes, white and grey fur, and bared teeth glinted in the firelight. She threw back her head and howled in a tone that expressed defiance, commanded attention, and ended in a low growl. The drums ceased and the wolfkin stopped the celebrations, chests heaving and mouths open in stunned anticipation, or perhaps rage, at the interruption.

After a few heartbeats of tense silence, a wolfkin dressed in robes of blood red and spring green stepped forward and faced the fearless white wolfkin. He raised his chin slightly in a sort of greeting, and spoke loudly enough that his voice could be heard by all.

“Huntress! What do you mean by this interruption?” His tail swished to the side in a gesture of annoyance and he flattened his ears.

Huntress growled again and showed her teeth as well, “I mean to challenge the High Chieftess Lynsara. I MEAN to take her place.” She moved forward, eyes narrowed and every muscle tense and ready. “And I mean to take out every person who stands in my way, Marrok.”

The robed wolfkin bared his teeth and growled as she moved within inches of his face, only the slight lowering of his tail giving any indication of fear. Finally, he snorted loudly and stepped backward, almost dismissively. “Do you have the tribute necessary to issue such a challenge?”

Huntress straightened up and, keeping her eyes on the man in front of her, gestured to her right. The crowd of Banta Kinswae parted and four young wolfkin entered, dragging behind them the largest hobgoblin that anyone present had ever seen. There was a sugared apple in its mouth.

Huntress pointed at the tribute and bellowed in a ringing voice, “I, Huntress, Baroness Lobea Lav’Endros, hereby challenge the authority and capability of Lynsara Wolfstone as High Chieftess to lead the Banta Kinswae. I declare my intent, here in front of my healed brethren, to take her place whether by force… or by her submission.” She paused here and looked at the robed man in front of her. “I have declared my intent, Marrok, and offered my tribute. The Chieftess will send me her Challengers, as is dictated by tradition.”

“It is not up to you to decide what the Chieftess will do,” Marrok snarled angrily. Then, composing himself, he gave what could have passed as a wry smile.”And besides, you’ve forgotten about the Affirmations, Huntress. I see no one here to offer testament to your ability to protect and provide for your pack.”

Huntress, too, offered an attempt at a smile and reached into a pack at her side. “Here,” she growled, thrusting several sealed scrolls into a surprised Marrok’s arms.

“Affirmations from members of House Lav’Endros and from several other nobles around Irvanshire. I have commonfolk on their way to give personal testimony and several other letters that should be finding you through the Messengers’ guild within a day.” She crossed her arms and glared confidently at the scowling man, a sarcastic sneer coming her to lips. “I will be back in a day’s time with the rest of my affirmations and to make sure you have finished your… paperwork.”

Smirking, she turned to leave the fire, but before she had taken five steps, a savage snarl erupted from the robed wolf-kin and he dropped the armful of scrolls he carried as he dove on top of the retreating figure. A brief, but brutal fight ensued, and within minutes Huntress had pinned a struggling Marrok to the ground.

“You have one job, Marrok, and it is not to challenge me,” she whispered fiercely. “Killing you would not prove enough to be worth the inconvenience of stripping the pack of your secretarial services, but challenge me again and your life will be forfeit.”

Huntress shoved the cowed Marrok into the dirt and looked down at him, disgust etched on her face. “Now, get up, pup, and let the High Chieftess know her time has come.”

With a final look of contempt, Huntress left the gathering.

It is official, then. A Challenge has been issued to the High Chieftess of the Banta Kinswae by the chieftess of the local pack, Baroness Lobea Lav’Endros (known to her pack as Huntress). If it is accepted, then over the course of a few weeks, several Challengers will be sent to test the ability and prowess of the Baroness in order to prove that she is capable and worthy enough to challenge Lynsara herself. A group of commonfolk from the Elmerton area has indeed left to give personal affirmations, despite the workload that accompanies the approach of Spring and the planting Season. Though a challenge of this sort is not unheard of, it is certainly uncommon. It will be interesting to see how it plays out.