Here are our picks for the Best of the September 25th-27th event: 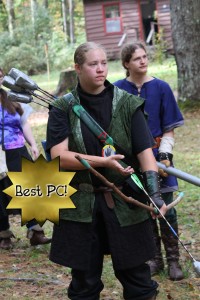 Linarien stood out to me this moon. She was very involved in helping the town in every way she could.

This month’s Best PC is one of the sweetest people we know and we have recently started to see her shine both IG and out. Whether Steph Lindquist is taking on the job of Setup Coordinator before game or Linarien is standing up to Carzon (even if it means going on a crazy emotional roller coaster ride), Steph has stepped up her game to levels we have just not seen from her before, and we are thrilled and extremely grateful to have her at Magestry. This season would have been much more stressful without her and the game, in-game and out, would have suffered without her here. Thanks so much, Steph! We really appreciate it!

“Linarien did a great job of keeping an eye on what was going on in town stepping into the spotlight to lead when necessary.”

“Linarien isn’t always noticed, but she has gotten increasingly faster and stealthier. Her role-playing has also evolved and Linarien is coming into fruition. She was really getting in there and fighting for what she believed in and for the good of the town.” 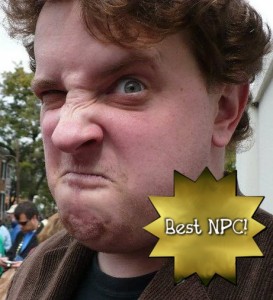 Our Best NPC for this month was truly a lifesaver this event. Did you interact with people in the Broch? Did you find little interactions you could do with another PC throughout the Tourney Field? How ‘bout them components? Yup! Almost all of that was done this event by Dave Kopchick. Dave just recently joined staff and has been a breath of fresh air behind the scenes. He is so full of positive energy and unrelenting enthusiasm that he really energizes the staff and helps us to stay motivated and ready to go. We are so very glad to have him back at game and happier than we can say that he joined the staff. Thanks so much, Dave!

“Dave K. did an amazing job this event no matter what he was out as he put in 100 percent. I’m really glad to see him back. Whether he was out crunching or out talking to the town we had great interactions with him.”

“My favorite NPC this game has to be Dave Kopchick. He’s a great guy to have around, and really shines when it’s time to goblin.”

You’ll never guess the surprise that befell me several weeks ago. As I was on the edges of my compound, patrolling for poachers and safeguarding the wood, I stumbled across several wood trolls making a beeline right for me. As I fight defensively, I drew my blade and awaited their attack, but, surprisingly, they proceeded to run right by me! Flabbergasted, I continued to patrol my lands and discovered several other groups of wood trolls doing the exact same thing! They all appeared to be heading north, but kept looking behind them to the south, as if worried that something was following them.

Since then, other colleagues of mine have reported similar findings all over Irvanshire. The common connection seems to be that they are either migrating or fleeing north. As a researcher of all things natural, I encourage anyone with any information at all about these strange occurrences to make contact with me via letter or seek me out at my lodge in The Great Frostwood in person. I eagerly look forward to any responses at all. Keep your eyes sharp!

I will not lay me down to rest.

My heart beats quickly in my chest. 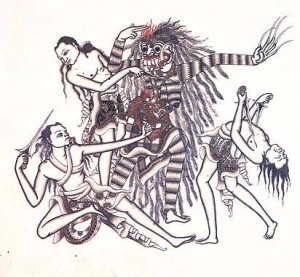 I sit at night in bed full dressed.

For in my dreams, it waits. It waits.

That used to be me. That was me.

Disturbing, isn’t it? This was a poem written by one of my constituents before he was found dead in his bed a week later. The frightened expression on his face and extensive internal bleeding perplexed his family and healers throughout the city- especially since there was minimal external damage (a spiraling bruise was found centered over his heart). His closest friends, when asked, said that he had been plagued by awful nightmares recently- especially ones in which a primal, clawed beast stalked him relentlessly before shoving its claws through his chest and killing him. The strangest thing about these dreams seemed to be that he stayed asleep through his dream death longer than most people do. Most people, for example, will wake up before they die in their dreams. However, this young man claimed that he saw himself die at the hands of this intelligent hunter in his very vivid dreams. Sadly, these strange dreams weren’t given much consideration until after his death. Since then, there have been at least a dozen or so people in Hatchport alone who have come to me relaying hauntingly similar dreams.

There have been several deaths recently that have very similar circumstances (all with spiraling bruises left on their bodies) and whose families have relayed similar concerns about nightmares, and it is my belief that this will continue to happen. I believe that we have a killer on our hands that is able to move, and kill, through dream itself. I will be taking pains to investigate the kingdom and stop this, so if you have information or have witnessed either these nightmares or know someone who has, please send information to me as soon as possible.

The Minnow’s Call by Solun

Madness seeps from my skin and yet I am still mad

Sadness drains from my eyes and yet I am still sad

They cannot keep you from me

We have an appointment

They cannot save you from me

I will peel them one by one

I will see my mission done

A New Belt by Solun